As a young child in Sault Sainte Marie, 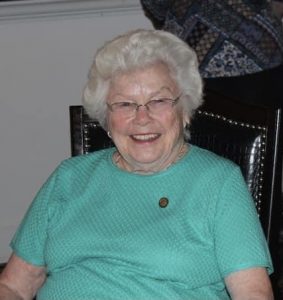 Michigan, Ms. Marion Crawford knew exactly what she wanted to be when she grew up. Her future was set after watching the WAAC’s (Women’s Army Auxiliary Corps) march through her town for the first time during WWII. The daughter of John and Cecilia Crawford, Marion spent the majority of her spare time with the WAC (Women’s Army Corps) in their orderly room, and they even had a child-sized uniform for her to wear.

At the end of WWII, the WAAC’s were dismantled. Upon reaching enlistment age, Marion wrote letters to the Department of Defense asking for the WAAC’s to be reinstated. Upon receiving a reply, Marion was the first in line to enlist.

As a woman, Marion climbed the ranks quickly, making First Sergeant at the age of 23, and soon found herself in recruiting command, encouraging other women to join. In October of 1966, Marion was hand picked by General Hossington, alongside Captain Peggy Ready, as the first, First Sergeant into Vietnam building the unit from the ground up. Marion returned home in June of 1968. 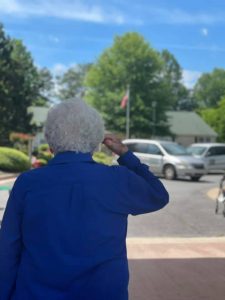 Upon returning stateside, Marion was either running companies as a First Sergeant or working in the recruiting command. After retirement from the armed forces, Marion ventured out into different careers. For example, Marion spent 20+ years as a Real Estate Agent with Caldwell Banker and later purchased an RV Resort. When Marion and her long-time friend Joyce finally decided it was time to “re-retire”, Marion purchased a motor home and traveled, enjoying the beauty of all 50 states.

Marion and her “sidekick” Ginger (her Yorkshire Terrier who is always by her side) soon found their home here at Brasstown Manor in June of 2018. Living here allows us to support her where needed and allow her to live the life she wants to live.

Stay tuned for our next resident spotlight!